Art connection is more than making a copycat version of an artwork. It’s looking at art, talking about art, sitting with art that sparks something inside you, finding the places where it interacts with your own life, listening to what it says about the world, and finding your own interpretation and meaning. This summer, we’re getting together for the Curated Connections Experience so we can feel and teach the power of art. Learn More 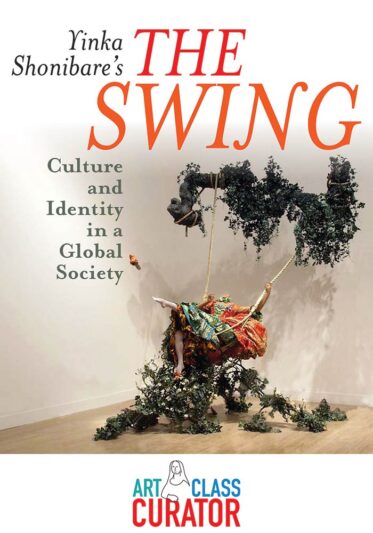 Inside: Comparing Yinka Shonibare The Swing (after Fragonard) with the original painting and exploring the commentary on race, class, and multiculturalism.

The Swing is Jean-Honoré Fragonard’s best known work and is an icon of the Rococo style. It’s a painting that’s so familiar, it can be easy to pass it by without considering the details or the story behind it. Yinka Shonibare, a bi-cultural artist whose work explores issues of race, class, and colonialism, recreated the famous artwork and gave us a lot more to think about.

Fragonard’s original painting depicts a lavishly dressed young woman swinging with the help of a man in the shadows while another man looks up at her from below. Symbolic statues watch in the lush outdoor setting and the man below is well placed to look up the woman’s skirts. The woman is looking at the man while one of her shoes is flying over his head, seemingly flung from her foot. The artwork is rumored to have been commissioned by a man who wanted a painting of himself and his mistress, a detail which adds an interesting layer to the original title of the painting, The Happy Accidents of the Swing.

The Swing (after Fragonard)

Yinka Shonibare The Swing (after Fragonard) features a lifesize, three-dimensional recreation of the woman on the swing with some of the surrounding foliage, but there are many notable differences. The eloquent dress is made with bright African wax prints (that aren’t exactly African) that are branded with a fake Chanel logo. The mannequin skin tone is brown rather than white.

Yinka Shonibare The Swing (after Fragonard) was not the first or last Rococo artwork the artist took a guillotine to.

It’s worth pointing out that The Swing became a hallmark of the frivolity and wealth that philosophers in the Age of Enlightenment abhorred, and less than 30 years after Fragonard finished his painting, the French Revolution began claiming the heads of many in the aristocracy.

Shonibare’s version invites us to consider who society allows to be light-hearted, the trappings of sexism, racism, and classism, and the status symbols we use as a cultural shorthand to tell us who is important.

Much of how we define ourselves is determined by how society sees us and most people don’t take more than a glance. Our gender, the color of our skin, the clothes we wear, and the activities we take part in speak for us. Without our voice, without our heads, what do our bodies say?

In addition to the beheading, another key change in Shonibare’s recreation is his use of color and pattern in the fabrics. When researching the work of Shonibare, I discovered these fabrics that we would usually associate with Africa did not originate in Africa. These “Dutch wax” fabrics were originally created in England and Holland, and they were sold to people in Africa after selling them in Indonesia failed. These fabrics became an integral part of African culture, and Shonibare found that duality of cultural identity interesting. He said, “But actually, the fabrics are not really authentically African the way people think. They prove to have a crossbred cultural background quite of their own. And it’s the fallacy of that signification that I like. It’s the way I view culture—it’s an artificial construct.” 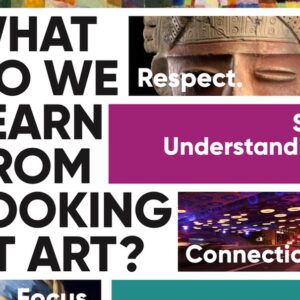 Identity in a Global World

Shonibare was born in London and grew up in both Nigeria and the United Kingdom. When asked about multiculturalism, he said, “In a diverse society, people have to find a way of being together, and that can only come from understanding other cultures. Otherwise, you’re just fighting for space.”

Yinka’s work asks us to think about how identities are constructed in today’s global society. This is an essential question for all of us, but especially the youth who are discovering and sculpting themselves for the first time. In a society that often reverts to ‘us versus them’ and prizes the individual over the collective, it is vital for our students to actively participate not only in the creation of their personal identity, but in the building of a shared, inclusive community identity. Comparing Yinka Shonibare The Swing (after Fragonard) with the original can help them do that.

Use Yinka Shonibare The Swing in your classroom with the following discussion questions.

The compare and contrast art activity from the bundle of free art appreciation worksheets is a great way to get students thinking. This would be a great artwork for older students to write about, especially when they’re studying the history of the 1700s. Putting this artwork with others that show the duality of culture and reference colonization and class systems would open up the educational possibilities. 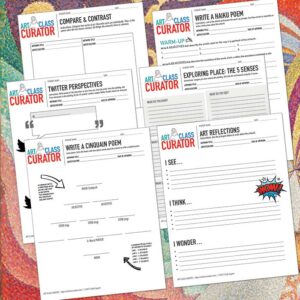 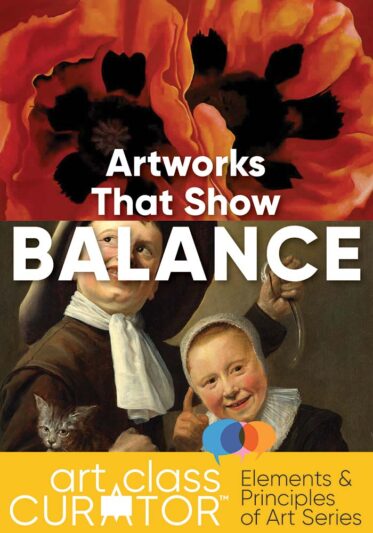 I will add to this examples of balance in art list when I find more, so this is a good one to pin or bookmark! The horizontal picture collages do not have all the pictures from the categories.

What does balance mean in art?

Balance in art is just what is sounds like; it is the sense of stability in a work of art. To create balance in art, artists combine the visual components to ensure that one part of the artwork doesn’t completely overshadow the rest. Each choice made by the artist is a deliberate one in order to ensure equilibrium and balance in the art. Artists create this pleasing effect using the different types of balance in art listed below.

What is asymmetrical balance in art? Asymmetrical balance in art is when each half is different but has equal visual weight. The artwork is still balanced. For example, in the Caravaggio (the picture in the right in the collage), the three men are balanced with Jesus on the left. Jesus is facing forward and in brighter light which balances out the three men in shadow.

Off-Balance or Unbalanced Artworks (kind of)

It’s hard to find artworks that are unbalanced by well-known artists. These teeter on the edge between asymmetrically-balanced and unbalanced. It’s up for debate and would be a great discussion with your students!

Do you have great examples of balance in art? Share them with me in the comments, and I will add it to the list! 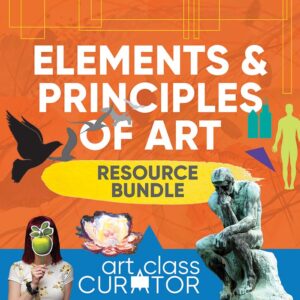 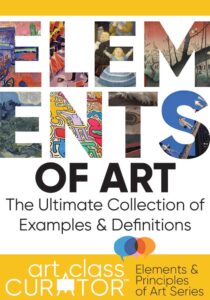 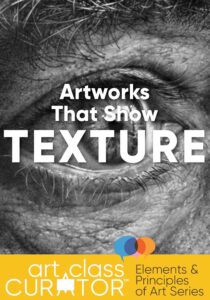 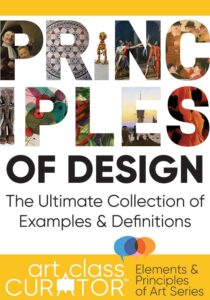 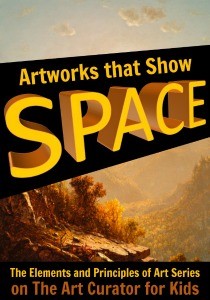 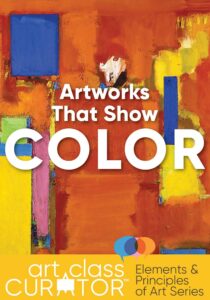 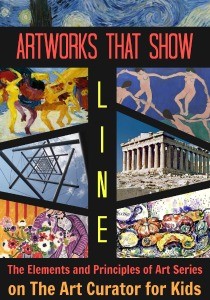 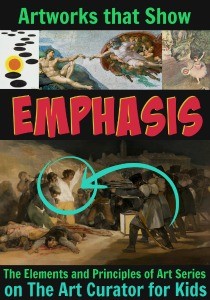 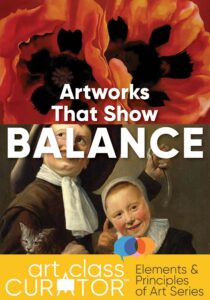 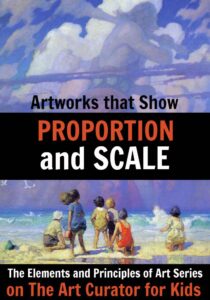 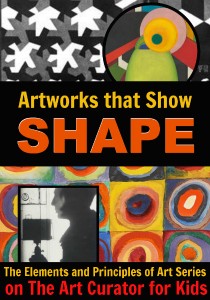 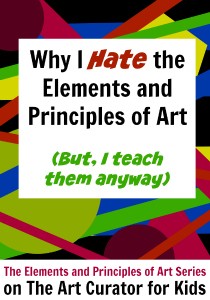 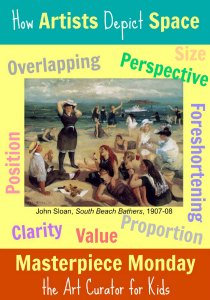 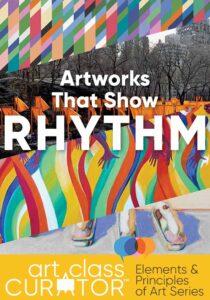 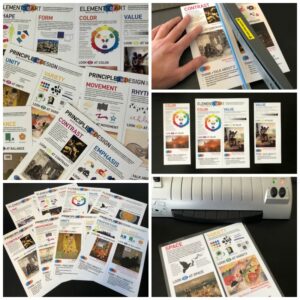